GET YOUR
HANDS DIRTY!

During three days, participants can enjoy a groundbreaking film line-up, get hands-on experience in our demo sessions, immerse in virtual reality, be inspired by world-class music and more.[/vc_column_text][/vc_column_inner][/vc_row_inner][/vc_column][/vc_row][vc_row][vc_column][vc_tta_accordion][vc_tta_section title=”Demo Sessions” tab_id=”1519834124236-b619a065-f3ab”][vc_column_text]The Global Festival of Action for Sustainable Development strives to deliver a platform and focussed meeting space for SDG stakeholders from across the Globe to connect, network, share ideas, plans and build ongoing relationships and partnerships. To help facilitate this, you will find ‘Demo Spaces’ positioned around the venue where you can invite new and existing partners to meet, connect and share ad hoc presentations.

Each Demo Space is equipped with informal-hosting areas fit for around 10 people and two of these have monitors set-up so you can share visual presentations with your colleague.

These spaces are intended to be used for ad-hoc meetings, whether you get chatting to somebody interested in the Innovation Fair that you want to engage with further, whether you connect with them directly on the Event Management App and arrange to meet or whether you want to bring together some of your key partners – the space is yours to use as you need![/vc_column_text][/vc_tta_section][vc_tta_section title=”GAMES” tab_id=”1519834124238-e9012605-a7ae”][vc_column_text]SUSTAINABLE IDEAS GAME

Sustainable Ideas Game (SIG) is an interactive board game, for 3 to 6 players, that combines elements of awareness raising, personal reflection, social interaction and concrete steps to engage people for the implementation of the Sustainable Development Goals (SDGs). The players’ goal is to gain as many points as possible by coming up with practical ideas to implement the SDGs in both personal and professional level.

The board game is divided into squares with the 17 SDGs, “community challenges”, and “reality checks”.  By moving forward on the board, players will be stimulated to engage in these different dynamics and reflect on their role in achieving the SDGs. Hopefully, after playing people will continue, individually or collectively, to develop and execute the best practical ideas that come up during the gameplay.

The Decent Work Game is an interactive life-sized board game, in which people navigate through the true stories of workers helped by the International Labour Organization. The game involves three real stories, based on child labour, gender equality and forced labour. By walking in the shoes of real people who have suffered exploitation, the game allows players to better empathize with and relate to the people that the ILO helps but also to better understand the work that the ILO contributes globally. By combining story-telling with puzzle-like problem solving and physical movement the game has proved engaging with people of all ages. The game was first developed in 2015 by the ILO Department of Communications and Public Information (DCOMM).[/vc_column_text][/vc_tta_section][vc_tta_section title=”SDG Action Campaign Interactive Space” tab_id=”1519834531823-ef428b21-c592″][vc_column_text]Come meet us in person! In this space, you can get to know the faces behind the SDG Action Campaign and learn about all our initiatives at once. Gain insight on citizen perception on SDG progress by exploring the MY World 2030 survey, learn about real-time cutting-edge advocacy support from our big data and analytics experts and find out how we are using new media to generate engagement.

We know we can’t do this alone! We’re looking forward to hearing your ideas, as well as exploring ways of collaboration and mutual support.[/vc_column_text][/vc_tta_section][vc_tta_section title=”Virtual Reality Zone” tab_id=”1519834525818-ce3e282a-311d”][vc_column_text]Since January 2015, the UN SDG Action Campaign has coordinated the United Nations Virtual Reality Project to bring the world’s most pressing challenges closer to decision makers and global citizens around the world, pushing the boundaries of empathy. UNVR shows the human stories behind development challenges, allowing those in power to make a difference as they gain a deeper understanding of the everyday realities of people who are in danger of being left behind.

The UNVR team has curated a special selection of immersive experiences for the festival, which immerse you in the lives of people around the globe you may not normally meet, and places you may not be able to visit. We will also introduce the next frontier of how VR can be used as a tool for impact in education, behavior change, and training. The exhibition will include several premiers, and never before seen previews of content from the UN system and other partners. [/vc_column_text][/vc_tta_section][vc_tta_section title=”Photo exhibitions” tab_id=”1520348789601-720a4fe8-7f0b”][vc_column_text]HUMANS OF MY WORLD

This exhibit features peoples’ voices from the UN SDG Action Campaign’s photo-narrative series Humans of MY World, shedding light on the human stories behind the Sustainable Development Goals (SDGs).

You will have the chance to “meet” individuals from around the world and learn why the SDGs are important to them!

In 2017 the Alumniportal Deutschland* asked its global members to take a photo that shows the global community the biggest challenge or the most urgent need for action in their city or their country or to show which of the topics of the 2030 Agenda are particularly close to their hearts. Nearly 200 images from all over the world were submitted for the photo competition “Take a look – Get involved!”. The participants took the call literally and had a closer look: Many distressing pictures were submitted, but also many that convey hope. The accompanying comments were very personal and give food for thought. The Photo Exhibition shows a selection of the most impressive photos.

*The Alumniportal Deutschland is a social network for Germany-Alumni, i.e. individuals from around the world who have studied, worked or conducted research in Germany. It offers its users the opportunity to get in touch with Germany-Alumni from around the world as well as companies in order to discuss specialist issues, develop their skills and benefit from the expertise of others.

Behind the Alumniportal Deutschland is a cooperation project headed up by the Deutsche Gesellschaft für Internationale Zusammenarbeit (GIZ) GmbH and involving the Alexander von Humboldt-Foundation, the German Academic Exchange Service (DAAD) and the Goethe-Institut. The project is funded by the German Federal Ministry for Economic Cooperation and Development (BMZ) and supported by the Federal Foreign Office.

Women play a crucial role in peace processes such as Colombia’s. To shape their memories with a look to the future, a group of Colombian women victims of the conflict worked with the UN in a project that seeks to illustrate the 17 Sustainable Development Goals (SDGs).”Zurciendo memorias”, or « Sewing Memories » is a book and exhibit on the SDG’s. It retraces the work of a group of women, victims of the 52 year Colombian conflict with the FARC, who insisted on “weaving the future » by reinterpreting the SDG’s as they see them in relation to their stories and their communities. The group is called the Costurero de la Memoria because it refers to “the long road that the victims of socio-political violence have had to travel throughout the national territory and the existential territory”[/vc_column_text][/vc_tta_section][vc_tta_section title=”Social Event” tab_id=”1519834703535-97ba7335-1e84″][vc_column_text]After two intense days of insights, co-creation, and sharing, all participants will connect, celebrate and engage in a social event on the river Rhine. This will be a great opportunity to get to know fellow Festival-goers, share some of the interesting ideas and stories you’ve encountered so far, and build those important relationships to help you revolutionise action around the SDGs. After the closing plenary ends, the boat will depart at 19:00, dinner and drinks will be served on board and the boat will return at 22:00.[/vc_column_text][/vc_tta_section][vc_tta_section title=”World’s Largest Lesson” tab_id=”1519834736456-9568eb31-0682″][vc_column_text]The World’s Largest Lesson is an opportunity to take meaningful, local action on the Sustainable Development Goals during the festival itself. This is a 2-part activity where Festival participants will have the opportunity to craft their own World’s Largest Lesson in teams of 2-3 under the guidance of expert facilitators that are driving this global movement. During the second day of the Festival, participants of this session will go out to local schools and will deliver their lessons to a grade 5-8 class (students aged 9-13 years) in Bonn, empowering them to take part in the MY World Survey and commit to taking small actions on the Goals.[/vc_column_text][/vc_tta_section][vc_tta_section title=”Meditation and Drumming Workshops” tab_id=”1519836064325-f0bd1897-8117″][vc_column_text]You can take a break from the regular sessions enjoying meditations and drumming workshops during the Festival.

Early-birds can learn the basics of meditation and its benefits with Renata Faria, founder of the global movement “Medita na Rua” (Meditate at the Streets), which promotes collective meditation in public spaces.

The drumming workshops are led by Chilean musician Pedro Greene, facilitator of the group play activity “Tambores del Alma” (Soul Drums). The experience is based on percussion music and consolidates teamwork, self-awareness as a fundamental element of a group, emotional communication, mind-heart-body coordination, fellowship, very deep work with attention and the ability to face and carry out a challenge effectively. It is not required to be a musician.[/vc_column_text][/vc_tta_section][vc_tta_section title=”SDG Comics Exhibit” tab_id=”1521033735470-fbcb6703-2acd”][vc_column_text]SDG COMICS “Alain Possible and the Possible World”

Localizing the SDGs Creatively in Haiti

The Comic “Alain Possible and the Possible World” (originally produced in French under the title “Alain Possible et le Monde Possible”), was produced by UN Haiti and inspired by an already existing and famous Haitian comic. The goal is to explain the Sustainable Development Goals with a localized and engaging story that invites everyone to reflect on the key role and the power of civil society to take action to advance the 2030 Agenda.

The comic is being used to support advocacy and educational activities in Haiti for diverse audiences of all ages. In collaboration with the UN SDG Action Campaign, the original comic has been adapted into a global version that can be used by any country. 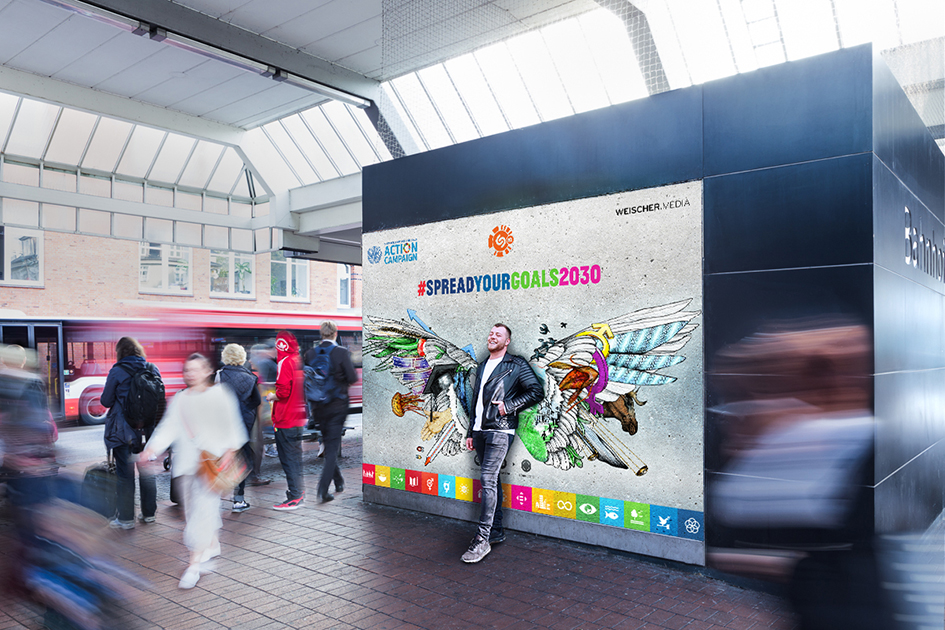 Weischer Media, in collaboration with the UN SDG Action Campaign, launched an innovative SDG awareness campaign in mid-March, combining outdoor, cinema, mobile and Influencer advertising. Billboards across Germany, showing a wing with elements from all 17 Goals, carry a Shazam Code to enter an Augmented Reality experience. All 17 Goals are represented by beautiful SDG angel wings available through Shazam’s new Augmented Reality feature. Scan the Shazam Code, choose the wing representing the goal you want to stand for and share it with your community on social media. One of these billboards will be on display at the Festival.[/vc_column_text][/vc_tta_section][vc_tta_section title=”Live cooking show” tab_id=”1521459612139-52ce9b31-8408″][vc_column_text]The Government of Catalonia has been committed to sustainability for a long time. The active participation in the Rio de Janeiro Earth Conference (1992), the Advisory Council for the Sustainable Development of Catalonia (CADS) establishment (1998),  and the 2026 Strategy for Sustainable Development of Catalonia approval in 2010 (long before the 2030 Agenda), are just a couple of specific actions that evidence such commitment.

Since the 2030 Agenda was approved, the Government of Catalonia has been busy developing a plan for the Implementation of the SDGs in Catalonia. The process has been innovative and led to relevant findings.

The Global Festival of Action is an outstanding occasion to share this experience with participants from all over the world, as well as learn from global SDG leaders, identifying potential partners committed with global sustainability to develop joint ventures and work towards achieving the SDGs.

Catalan cuisine is sustainable and can help to raise awareness about the SDGs. To demonstrate it, a Catalan chef will cook sustainable and delicious dishes, as well engage in a dialogue with the audience using storytelling techniques to promote the 2030 Agenda spirit.

To be held during the first day of the Festival.

Locations of the Festival Experiences: